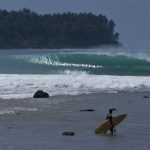 The Point pumping on 19 March 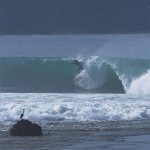 Air drop into barrel of fun 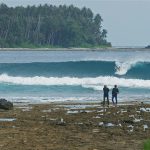 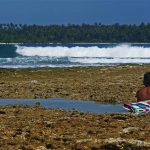 Across the reef to outside Kiddies corner. A groms perspective 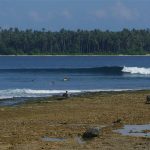 Kiddies Corner has been fun 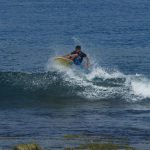 Afternoon some bigger 3ft + sets on the outside and a few European tourists having a crack.  Kiddies corner offering fun skate park walls and ramps to go to town off – Offshore all day

Some peelers on the morning higher tide but dropping back with the tide going out looking good for the rising tide afternoon session. This morning had only 3-5 guys ripping it up on the long workable walls of Kiddies corner – Perfect crisp offshore breeze

Rahel Wau, Nias local firing of tail slides and semi airs not bad for a 35-year-old.  He was joined by some French travellers on fish twins carving it up – Offshore all day

1-3 foot this morning, tides are getting bigger in morning, low during the heat of the day, water is crystal clear, winds offshore NNW and little crowds. Very hot clear day on the equator

Great arvo session.  Just starting to push onto outside kiddies, 3 people out the back with the grommet pack on the inside kiddies corner. Great arvo with long wait between 3 wave sets – Offshore most of the day with swing to WNW in the afternoon with increased gusts

Friday 17th March: Smaller on the low this morning with an increase with the tide push

Waves more consistent 2-4 foot out the back current is pushing strong.  Rahel Wau firing off huge floaters and snaps on the sets as it comes, only 4 guys surfing – Wind SSW with slight storms in the mountains

3 wave sets, Grew in morning to 11 at midday. Not too solid swell with easy take offs and some tubes.  Surf pumping 3 5 foot all day with a few double ups bombs in the late afternoon. Winds: Still to variable and offshore.  Pleasant crew in the water and everyone stoked.  Our new guest arrived late afternoon and has lucked out with a great start to the week with an increasing swell and very few people around

Nice waves – Offshore all day.  Crowds down to 6-10 surfers. Next week’s report will detail more of the first solid swell of 2017

About the Author: admin